Clothing and fashion for men during the Gold Rush

Men were very concerned with fashion and accessories in the 1850s, though perhaps not as much as their womenfolk.  Clothing was a sign of one’s class and status in society; it could tell you about a man’s level of wealth, respectability and their occupation.  But here in Victoria, as the gold rush was causing a shift in wealth and class, the distinction was not always so clear.

Well Dressed Gentlemen in the 1850s

A wealthy gentlemen of good standing in society would take great pride in his attire, ensuring he is always correctly dressed and well presented.

In the 1850s there were a number of essential items to be worn at all times, including: waistcoat, frock coat, a silk scarf tied as a cravat or bow, and a top hat (worn whenever out of doors).  Optional items to correctly accessorise the look would include a fob watch (or pocket watch) and a walking stick.

The Digger and the Worker

The idealised dress of the 1850s gentlemen was a long way from the reality and practicality of the miner or labourer.  A miner wore practical and durable clothes: including a broad-brimmed hat to keep the sun off and a neckerchief that served as a sweat-rag.

Most miners were not well-groomed as bathing and washing of clothes was often deemed a rare luxury.

The Man in Uniform 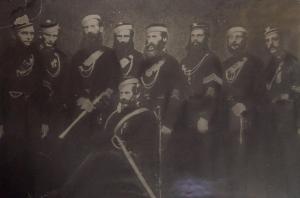 Many men would dress in uniform according to their occupation.  It was not uncommon for men to wear their uniform on formal occasions where they were not working.  Soldiers in particular took great pride in their position and therefore their uniform.

Common uniforms to see around the goldfields include: Redcoat soldiers, other militia groups, Troopers (police) and Firemen.

One of the interesting features of the gold rush was that the typical class-based clothing was changing.  As men of a lower class were finding success in mining or business they were ‘dressing-up’; wearing clothes above their class.   This made some people (normally those of the wealthy upper class) very upset.

The poor men with new money were often easy to spot as they didn’t always dress ‘right’.  They may have bought a new top hat, cravat and fob watch, but continued to wear their old trousers and shirt.  They were often frowned upon for wasting their money when they should be planning for the future.

Here at Sovereign Hill we portray men of all categories: diggers, gentlemen, new money, those in uniform and boys.  We encourage visitors to ask the men in costume about their occupation and wealth – but now you may already know!

Would you like to know more about Gold Rush Fashions? Try our other blogposts on Women’s, Men’s and Underwear fashion.