Children’s Clothing during the Gold Rush

Children’s clothing would depend largely on the wealth of their parents.  Those children fortunate enough to be born into wealthy families would have comfortable, high quality and fashionable clothing.  Poor children would have to make do with basic clothes that would be worn until they fell apart.  Social expectations of the time dictated that children, like men and women, should be modestly and neatly (as much as possible) attired at all times.

As was the fashion in Britain, most young boys would wear belted tunics.  These looked much like girls dresses and so pictures of young boys from the era are often mistaken for young girls! 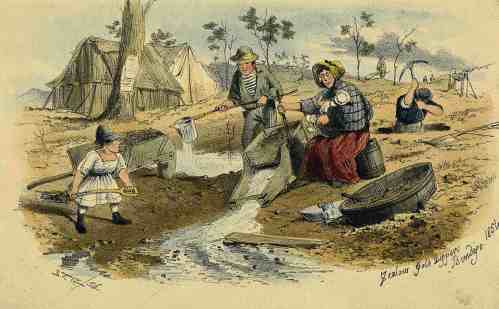 From the age of 4 or 5, boys would normally start wearing long shorts, known as knickerbockers, and shirts.  They would often wear a loose style of neck-tie, known as a neckerchief, and a jacket.  Peaked caps were the hat of choice for boys for a long time.

Wealthier boys may wear something more like a tailored suit, but with short jackets. 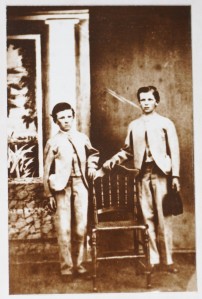 Girls Clothing in the 1850s

Girls wore dresses, often of the same material as their mothers and/or sisters.  These dresses were not as long as when they were older, but they wore ankle-length pantalettes to ensure their modesty.  Pinafores were often worn to protect the dresses and capes were worn in cooler weather.   Day-caps were sometimes worn and hair was normally centre-parted and neatly plaited.  As girls reached their teenage years their skirts would go down and their hair would go up!

Wealthier girls could afford ribbons and silks.  Their clothing would be more fashionable and less practical.  They would not have patched or worn clothes like that of poorer children.

Would you like to know more about Gold Rush Fashions? Try our other blogposts on Women’s, Men’s and Underwear fashion.

Often when you come to Sovereign Hill you will see children dressed in 1850s costumes.  Most of the time these are students participating in our costumed schools program.  The students are given clothing guidelines before they come and supplied with the major items of clothing.

You can read more about the costume guidelines on the Sovereign Hill Costumed Schools website.