Nice teeth… and other historical inaccuracies

If there is one thing that most historical recreations get wrong, it’s probably teeth.  Dental care in the past, like most of the medical profession, was generally dreadful.  Consequently many people would have had rotten, missing or crude false teeth.  Even here at Sovereign Hill, most of us have a good set of chompers… certainly a greater number than would have been the reality in the 1850’s!

Dental care of the past: a soldier receiving dental treatment c.1915-1918 (Image from the State Library of Victoria)

We can probably assume that modern people playing historical roles would prefer not to knock out a few teeth to better fit the part.  Fair enough.  But it certainly leads to an inaccurate look.  The same could be said of hair – generally it is far too clean and glossy in recreations.  The poorer folk in the past, women in particular, were loath to wash their hair more than a few times a year for fear of catching a chill.  And modern-style lathering shampoos were not around.

Sometimes there are some clever references that allude to these aesthetic differences.  Last night (23/10) on Wild Boys Dan suggests they head west where the “streets are paved in gold and there are women with their own teeth.”

Discussing hygiene and medical care with students can really bring home the realities of life in the past.  You can ask your students to spot the inaccuracies in historical recreations and discuss other parts that may have been omitted.  Questions you could ask might be: how do you fight infection without antibiotics? Where would a women give birth on the diggings?  What would happen to meat that is slaughtered and sold in an outdoor butchers?

You might also like to use old newspapers to initiate discussion.  Doctors and dentists were sometimes not qualified and shrewd business men.  The image below is take from TROVE digitised newspaper collection, which is a great resource. 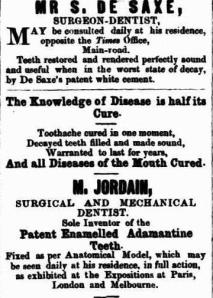 3 responses to “Nice teeth… and other historical inaccuracies”