On Friday (28/10) we were fortunate to have Mr Craig Deayton as the speaker for our annual Weston Bate Lecture.  Craig spoke about his research on the 47th battalion from the First World War undertaken for his book Battle Scarred.  His research was an eight year labour to seek out stories beyond the official records and as a result his book has been acclaimed for its honesty and descriptive detail.

The 47th Battalion was formed in Egypt in March 1916 and made up of predominately Tasmanian and Queensland soldiers.  The battalion served on the Western Front and holds the sad honour of being one of the shortest lived units with one of the highest fatality rates (only two other units were higher).  Craig showed the image below to highlight this devastation, it shows the 73 remaining men from the original unit that numbered over 1000 men. 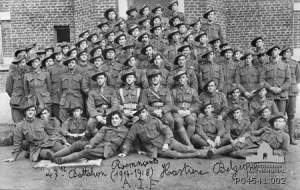 In his talk Craig outlined a little about the battalion, including their relatively multicultural origins and the battles in which they participated.  However, the key area of interest for teachers had to be his comments about research.  The Weston Bate lecture was inaugurated to celebrate local history research, and while WWI history is undoubtedly world history, Craig argued for the fact that the individual stories and local impacts that are equally as important as the bigger picture.

Craig said that the online access to primary source material has made historical research easier in some ways but also requires researchers to go deeper.  Therefore he spent much of his research time finding and reading letters, diaries and memoirs held in personal and private collections and smaller institutions.  The power of this research was that it showed personal stories and added a deeper level of humanity to the tale.  It also uncovered events that were omitted from official records, such as two major incidents that had been covered up: a full-blown mutiny on a transport and a suicide during field punishment.

As teachers, this highlights to us that the local, personal and innately human story can provide a more powerful understanding of major world events.  There are so many resources available for students to deeply investigate WWI and WWII history: the Australian War Memorial has an extraordinarily comprehensive online collection, including service records.  If students are focussing on local people, perhaps even their own ancestors, they can also use local resources to find out more of the human story.  Local resources may include: local library, historical society, RSL, monuments or even relatives.

If you study local history with your students please share your stories, tips and links!

On the evening we were also lucky to have our local historian and musician Terrence FitzSimons, accompanied by Sovereign Hill performers Luke Tonkin and Andre Prenc, performing WWI era songs and some written by the 47th battalion.   There is a short sample below, and we will upload more videos of the music and the whole lecture soon – stay tuned!

7th November update: the full videos of the lecture and musical accompaniments are now online here.

This entry was posted in History Teaching and tagged local history, music, teaching history, world war one. Bookmark the permalink.