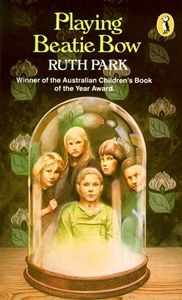 Playing Beatie Bow has been read in schools for the past 30 years or so.  While it may be beginning to look dated to children today and the language can be challenging, it is still a rich historical fiction full of insights into Australia during the Victorian era.

Fourteen year old Abigail, is living in modern (late 20th century) Sydney, when she suddenly finds herself in a Sydney she barely recognises; she has accidentally travelled back in time to 1873.  She is being cared for by the Bow family as she tries to find out how she got there and how to get home.  Meanwhile, the young girl Beatie Bow, who was responsible for leading Abigail to the past, wants to know why the children from Abigail’s time are playing a game called ‘Beatie Bow’.

One of the delightful things about this book is that it is chock-full of references to 19th century lifestyles, but they are subtly woven into the intriguing story.  As Abigail struggles to come to terms with the differences between her time and 1873 – infrequent washing, chamber pots and gender inequality – the reader gains an insight into life in the 19th century as well.

Playing Beatie Bow could work well as a shared class book in Year 5 and 6, where the teacher could read aloud excepts from the book (or the whole book if you had time) and simultaneously look at some of the objects and activities discussed in the book.    By looking up these objects and activities, students will get so much more out of the book.  It can also lead to great discussions and projects about Colonial Australian lifestyles.  Students at this age would need solid reading skills to be able to enjoy this book on their own.

Alternatively it could be read independently by secondary students where they could explore more complex concepts, such as health and medical treatment or the role of women in the 19th century.