What was eaten on the Goldfields?

Food on the Goldfields 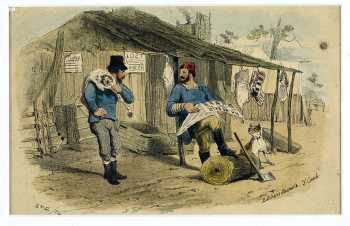 What types of foods were eaten during the gold rush? What utensils were used to cook with? What was life like for a cook in the gold rush? What things did they cook on? Was it hard for a cook? Did the children or men ever help the women? These were the questions sent to us by a year 9 girl recently. These are very good questions and we’re not sure we can answer all of them here. But evidence of the eating and cooking habits of diggers can be found in their letters home, diaries, newspapers and in some of the paintings and sketches from this time.

It is generally believed that the first diggers on the goldfields lived on Mutton and Damper (Old sheep and camp bread) at first. This could be true, as it would take time to grow vegetables, and at first diggers were not allowed to plant gardens. Sheep would have been plentiful, as Squatters had already established large holdings of land, with huge herds of sheep. This all makes sense, but are we being too general, and can we find evidence of this being the case?

Firstly lets look at the picture above, “The Butcher Shambles” by S. T.  Gill. Gill was a contemporary artist who visited the Victorian Goldfields, and we can use his sketches to interpret what life was like at the time. This picture shows the butcher calmly reading his paper, while the sheep carcases he has butchered hang from his veranda.  Gill must have forgotten all the flies, and luckily we can’t smell pictures.

This letter by James Petford, held by the Gold Museum of Ballarat says much the same. His handwriting and spelling is very hard to decipher, so here is a translated excerpt:

…The 2 pound coffee which cost 3 [pence] is now 6 pence. Meat according butter [now] 2 [and] 6 per pound and rising now. I do not know where it will end… You wish to know about the price of fish called ‘garfish,’ [which is] about the size of a Yarmouth herring. [It is] pence per [???]. Others in proportion, fowls [are] about 3 [and] 6 per pair. I have not seen a fire grate since I’ve been here. There is a sewer [?] hole left at the bottom level with the flour, and we burn wood, which is very dear [at] 18 shillings for a small cartload. Our chief vegetable is potatoes. [At] 7 pounds for 6 very likely we shall get them cheaper when we have got a marketplace…

While this is very difficult to understand, we can make out that he is obviously upset about the prices ao food and the primitive cooking conditions. It was written just before Gold was discovered in Buninyong (August 1851), and may have been written in Adelaide but it shows the diet was restricted to what could be sourced locally.

There were some exceptions to the rule though. Diann Talbot says in The Buckland Valley Goldfield that stores sometimes sold tins of oysters, sardines and lobster as well as jars of pickles which would have added greatly to the diggers diet.

Women who came to the goldfields would have done most, if not all the cooking for their family. Their increased knowledge of recipes, and determination to bring other forms of food with them would have made their cooking more popular than that of most male cooks. Indeed Caroline Chisholm is recorded as developing several different recipes for salt beef. Station Jack, Queens Nightcap, Trout Dumplings and Stewed Goose were all made with salt beef, in differing ways to make them seem different.

Want the recipes? What about the answers to the other questions? Then watch this space, as our intrepid volunteer Jenni Fithall spends the next two nights (19th &20th March 2013) living in one of our cottages.

61 responses to “What was eaten on the Goldfields?”