The Environmental Impacts of the Gold Rush

If we compare our environmental footprint to that of those who lived here during the gold rush, it’s easy to think they were gentler on the environment than us. During the 1850s the vast majority of people travelled about on foot, while modern Ballarat is a city of cars. Much of the food they ate was produced locally (mutton) and organically (using human or animal excrement as fertiliser on vegetable gardens) while we eat food with huge food miles, the production of which relies on intensive farming practices. Today, most Australians shower every day, which would have been unheard of in the 1850s; bathing only occurred once a week – if that! – in Victorian times, as clean water was often scarce. Life was simple and more environmentally harmonious before the Industrial Revolution got into full swing here in Australia, right?

Let’s look at the evidence.

Environmental change began in Ballarat when squatters established sheep runs across Victoria after 1835. The millions of sheep which fed on Victoria’s lush natural grasslands during this time not only destroyed much of those grasslands, they also caused the near-extinction of the Myrniong Daisy – the staple plant food of the local Aboriginal people. The Myrniong, which has an edible, nutritious tuber all but vanished within three years following the introduction of sheep.

The second wave of environmental change in Ballarat occurred as a result of the discovery of gold in 1851. According to research undertaken by Dr Fred Cahir, the early miners knew their work to be “the great despoiler of nature” (Black Gold: Aboriginal People on the Goldfields of Victoria, 1850-1870, 2012, p.118). During the time when surface (alluvial) gold was easy to find, Ballarat was quite literally turned upside down by the diggers. In addition to this, waterways quickly became polluted by the mining itself and by the miners living nearby. Trees were cut down to house and warm the miners, but also to use as timber in the mines.

William Howitt wrote that “The diggers seem to have two especial [sic] propensities, those of firing guns and felling trees. It is amazing what a number of trees they fell.” (Land, Labour and Gold, 1855, p.176-7).

Just a year since my arrival at Ballarat, and how changed it all is in that short time. Stretches of fine forest transformed into desolate-looking bare spaces, worked over and abandoned. In many parts, where a year ago all was life and activity, there now is a scene of desolation. At the same time the population has enormously increased, and there is less and less chance of having a lucky find… (Smith, Documents on Art and Taste in Australia: The Colonial Period 1770-1914, 1975, p. 119). 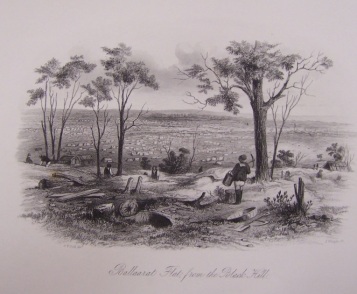 Ballarat’s forests, soil composition, waterways, and air quality were all profoundly impacted by the post-1851 population boom and the mining practices of these immigrants. Further evidence of this can be seen in the two drawings by Samuel Thomas Gill. “Ballarat Flat from the Black Hill” shows a vast, largely treeless plain with only small tufts of grass between the mounds of unearthed clay. The purpose-built cart in the background of “The Splitters” suggests the considerable size of the timber industry by 1864. 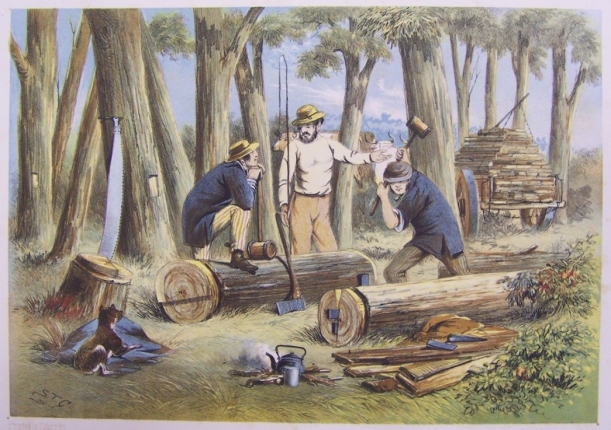 The photo “Black Hill and Railway” by William Bardwell shows Ballarat’s light-coloured clay which is here excavated and piled up in enormous mounds which loom over the centre of the city. 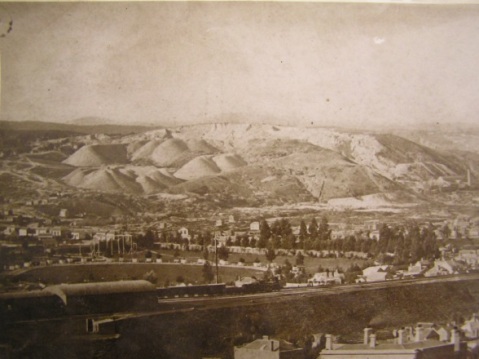 The Black Hill area was the only site in Ballarat where open-cut mining was practiced. Although not visible in this image, the principle waterway in Ballarat, the Yarrowee River, runs along the bottom of this clay moonscape and was used for steam production and washing (to separate gold from soil) by the Black Hill Quartz Mining Company pictured on the far right. Fortunately, Black Hill has now been completely reforested by trees which hide much of its ugly upturned history. Similarly, the photo “Llanberis Mine” shows a damaged landscape, silted water (on the left) and air pollution resulting from the introduction of largely wood-fuelled steam boilers which powered the mines from the 1860s onwards. In the steam powered stamper batteries, quartz rock was crushed into powder to extract the gold. This process not only consumed a lot of trees and water, it also utilised dangerous chemicals like mercury and cyanide which no doubt lingered in the landscape for a long time.

The city of Ballarat was built as a direct result of this environmental damage, but to a degree the wounds on the landscape have healed. Trees in backyards and public parks have brought wildlife back to the city, and the Yarrowee River now has a great walking track along it which takes people past lovely bush areas and relics from our mining history. The people of the Ballarat gold rush left a much more visible mark on the environment than us, but are we really doing a better job at caring for nature? What will be written about our treatment of the environment in 150 years?

A similar blog on the environmental impact of gold – http://www.sbs.com.au/gold/story.php?storyid=124

4 responses to “The Environmental Impacts of the Gold Rush”