Oh, Sovereign Hill is a museum! 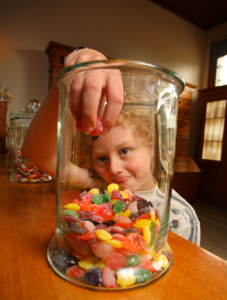 Many of our guests – young and old – get confused about Sovereign Hill. Some people think that it is a theme park because panning for gold, eating lollies and riding in horse-drawn carriages is so much fun. However, Sovereign Hill is actually a museum, meaning it is a place where Ballarat’s history is studied, artefacts are collected, and Australia’s gold story is shared with visitors. Most museums tell their stories through displays in glass cases, but we teach visitors about the past through living exhibits.

Why does Sovereign Hill do this?

The first part of the answer challenges us to think about the purpose of studying history – why learn about the past? History helps us understand who we are; it explains why we speak the language we do, why we dress a certain way etc., and it also helps us understand the wider world and our place in it. It teaches us to avoid repeating the mistakes that others have already made, and to appreciate all of the good things about 21st century life. History also helps us see that there are other ways of living, of organising our society, of thinking about ourselves, and that things can and do change, sometimes for the better, sometimes for the worse. Also let’s not forget all of the weird and wonderful characters, events, technologies and fashions from the past that make people of all ages giggle and gasp!

Why is Sovereign Hill a museum with living exhibits such as costumed people, fragrant horse poo and a creek complete with real gold? Because we think this is the most engaging and exciting way to learn about history. When you step through our gate you are sent 160 years back into the past, to a world of dirty miners, daggy troopers (policemen), and impractically-dressed but pretty ladies in big crinolines. Instead of looking at a display in a glass case, you get to talk to our costumed staff to learn about the past – do stop to have a chat, they are all very friendly!

Play is another important part of our living museum – try your hand at gold panning, go bowling, or make a candle. You can also taste history here – try some goodies from the bakery, or a lolly, or five. Lastly, you can smell the past – the lovely perfumes of the Apothecary (known in modern times as a pharmacy/ chemist) on Main Street were actually believed to prevent sickness! You will have so much fun in our museum that you won’t even realise you are learning. We believe that is the best way to make learning about the gold rush era stick in your head.

Of course not all of our exhibits are completely accurate for very practical reasons. If our museum really smelt like Ballarat did during the gold rush, you wouldn’t come. Nobody would! In the very early days after gold was discovered here in 1851, there were no sewerage pipes… You couldn’t flush away “your business”; you just tipped your chamber pot out wherever you could. By law you had to dig a hole to pour your poop down, but sometimes such muck just ended up on the street, along with the piles of horse and sheep manure. Talking of sheep, historians estimate that about 1000 sheep per day were walked into Ballarat to be butchered and eaten during the busiest part of the gold rush. This led to rotting scraps lying in huge piles next to the butchers’ shambles (shop), and this meant flies! I hope you agree that we have made the right decision in cleaning history up a little.

The most important thing we want you to do during a visit to Sovereign Hill is empathise with the people who were here 160 years ago. When you empathise with someone you try to put yourself in their shoes, and see the world through their eyes. When you walk around our Chinese Camp, try to imagine you were a Chinese gold miner living here in 1855.  What was life like for you? As you walk around the tents, imagine you were a woman with 4 children living on the diggings while your miner husband hasn’t found any gold. How would your family survive?

One of our favourite education sessions that school students enjoy is called “Gold Fever”. Maybe your class has visited us to play it, and you remember what it felt like to be a miner getting picked on by the nasty troopers. By competing to be the richest, and therefore, most successful miners, teams have to work together, be a little sneaky about Gold Licenses, and keep their eyes on the dodgy bankers. These are all problems Ballarat’s miners had to deal with on a daily basis. This game is all about teaching students to empathise with others and to understand how different life was in the past.

So, museums exist to teach people about history, while also teaching skills like empathy, critical thinking and chronology (putting historical events in order and understanding how one event often causes the next). Do you think Sovereign Hill does a good job at teaching visitors about history?

What is a museum? – http://en.wikipedia.org/wiki/Museum

Collectors of the Nineteenth Century

In Victorian times, collecting was all the rage. People collected many different things such as butterflies, stamps, shells, stones, weapons, and even human bones. Some were motivated to collect in the name of science, while others filled their parlours with “curiosities” just for the fun of it. While some of these 19th century collectors and their collections have helped us better understand nature and the many different cultures around the world, collecting may have sometimes caused more harm than good. 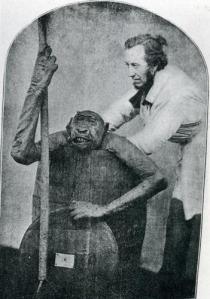 One fascinating Victorian collector was the explorer Paul Du Chaillu. He was the first European to see (and later kill) a live gorilla while he was travelling around Africa from 1856 to 1859. Until the 1860s, Europeans thought gorillas were mythical creatures. Their bones had been collected and studied in the late 1840s, but pickled (eew!) and stuffed examples of them weren’t brought back to Europe until the 1860s! Only then did people believe that these large, hairy Great Apes really existed.

Collectors have taught us much about the world. Probably the most famous collector of all was Charles Darwin, who developed the theory of evolution by natural selection (he published his famous book on this topic, On the Origin of Species, in 1859). In the 1830s Darwin sailed around the world for five years collecting many different kinds of plants and animals. This helped him develop his world-changing idea that successful animals adapt to suit their environment. While he brought many dead and preserved specimens back to England, he also collected live animals including giant Galapagos tortoises. Many people believe that Harriet, a tortoise at Australia Zoo which died in 2006 at the age of 176, was originally collected by Darwin. 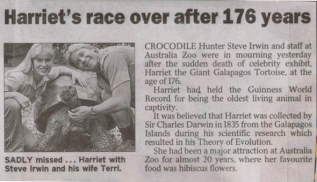 Darwin was one of many famous collectors who popularised collecting as a hobby, and by the 1850s it was a very fashionable pastime for a gentleman. Here on the Ballarat goldfields there were many men who collected minerals (stones), bird eggs, postcards, weapons made by the local Aboriginal people (the Wathaurong), and animals which would commonly be preserved using the technique of taxidermy (stuffing them). Sadly, there is even evidence that at least one collector in Western Victoria dug up bodies of Aboriginal people to take their skulls (Griffiths, Hunters and Collectors: The Antiquarian Imagination in Australia, p.28-9).

The bones of such “exotic” people would be sent to places like the British Museum to be studied and displayed. At the time this was seen as scientific inquiry but today the practise is illegal and recognised as being totally inappropriate and insensitive to the families and descendants of those deceased people. Fortunately, human remains from many countries which were sent to European museums and universities in the 19th century have now been respectfully returned to their communities of origin. The remains of Truganini, mistakenly believed to be the last Tasmanian Aboriginal person, were finally returned from the Royal College of Surgeons of England in 2002, 130 years after they were sent away from her homeland.

Sometimes people would try to use their collections to make money, and this often caused more creative collectors to invent curious creatures and artefacts. A good example of this is the Feejee Mermaid, which was exhibited from 1842 until the 1860s in P. T. Barnam’s world-famous circus. Another example was a petrified wooden carving of a head that claimed to have been discovered in a gold mine at Creswick, 12kms north of Ballarat in 1855. This was revealed to be a hoax after some initial excitement about what it meant for understanding Australia’s history of human habitation (Griffiths, Hunters and Collectors: The Antiquarian Imagination in Australia, p.35).

An advertisement for a human zoo in Stuttgart, Germany, 1928.

Perhaps the most dark and worrying aspect of collecting were zoos which displayed humans. Cities such as London, New York, Paris, Milan and Barcelona all had zoos containing “exotic” peoples by the 1870s.

While the word ‘scientist’ only came into use in 1834, the 19th century was an exciting time for science and discovery; fossils of dinosaurs and mammoths were being unearthed as were the tombs of ancient Egyptian pharaohs, and millions of people were moving from one country to another – by choice – for the first time in history. While many people still collect all kinds of weird and wonderful things today like Barbie dolls, rare books and beautiful antiques, we are much more careful about the kinds of things we collect and the way we collect them. Check out some of the fascinating collections preserved by The Gold Museum here.

About Charles Darwin and his work – http://darwin200.christs.cam.ac.uk/pages/index.php?page_id=jb