Lola Montez – the Lady Gaga of her day!

One of the most interesting ways to study a period of history is to look at the life of a real person, especially when that person is a colourful character whose life is so full of stories and scandals that they almost seem a work of fiction.  Lola Montez was one such person. 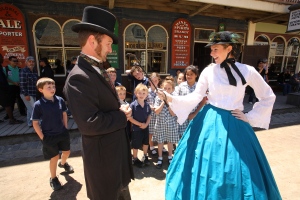 Born in Ireland in 1818 under the name Maria Eliza Dolores Rosanna Gilbert, she fashioned herself a new name and a new life that took her to right across the globe, and even into the embrace of King Ludwig I of Bavaria.  Lola was a performer, a strong self-determined woman who caused excitement and controversy wherever she went.  When she arrived on the Ballarat Goldfields in 1856 she was both loved and despised.

To study the life of Lola Montez means to embark upon the discovery of an era.  Through her story we understand social convention, cultural norms and the role of women in 1850s society.  On a more basic level though, examining Lola shows students the difference between lifestyles now and then, and how the role of women has changed over time.

Culture Victoria (CV) is an online portal maintained by Arts Victoria that captures much of our history in primary and secondary sources.  CV has an excellent collection of articles and resources focusing on  Lola Montez .

Here at Sovereign Hill, Lola features as part of our entertainment at the Victoria Theatre.  Our actors recreate her infamous and scandalous Spider Dance, as well as her fiery temper shown during an interaction with the local press.  Below is a video of Lola Montez being interviewed by our Museums Director.   It is an amusing and insightful interview that highlights the difference between Victorian and modern sensibilities.  Lola is described as the Lady Gaga of her time!

First person performance is also a great project idea for your students.  Students could research a historical figure and then assume their character to be interviewed by the class.  What an entertaining way to learn about the variety of people on the Goldfields!

If you’ve used Lola in your classroom please share your own tips and resources in the comments section.

TROVE has some wonderful articles about Lola and her adventures as well.

One response to “Lola Montez – the Lady Gaga of her day!”