One of the most iconic images of Sovereign Hill is that of the marching redcoats.  Daily they draw large crowds to their marching and firing demonstration.  They are exciting and entertaining to watch.  They can also prompt a thought-provoking question to students – why are they here?

The 40th Regiment at Sovereign Hill

These British Soldiers were members of the 40th Regiment of Foot.  The Regiment had a distinguished history and had been recognised for courage in combat.  The soldiers were often sent on exceedingly long tours of duty to some of the furthest posts of the British Empire – the colony of Victoria being one such example.  Their posting to Victoria was one they did not appear too enthusiastic about.  Probably due to the lowly nature of their tasks, such as providing an escort to convoys of gold, and the lack of opportunities to earn themselves glory in battle.  The colonial authorities no doubt valued their presence in the rather chaotic and turbulent years at the beginning of the gold rush, when the population was rising at a staggering rate and the police force was outnumbered and ill-equipped.  Then, when the civil unrest surrounding the events at Eureka began to unfold, the presence and power of the Regiment grew.  Their expertise and experience during the Battle was no doubt a key factor in the Government’s victory.  If you are interested you can read more about their history in Australia and role in the battle at Eureka.

There is no need for students to delve too deeply into the military history though; one of the most important connections to make is to understand the context and prior events that led to their presence on the goldfields: why are British soldiers in Australia?  Many students will not immediately make the connection to their prior studies of British conquest, Captain Cook and the First Fleet. With a few pointed questions, such as – Why did Captain Cook come to Australia and what did he do when he got here?  Why did the First Fleet come here, why here and where did they come from? – students are often able to come to the conclusion: British soldiers were here because Australia was under British rule.  The British soldiers are, in a manner of speaking, Australian soldiers.  It may seem like a simple connection, but it is an important one for students to make.  It can place their studies of the gold rushes more accurately within the broader context of Australian history and connect their prior studies to their present studies. 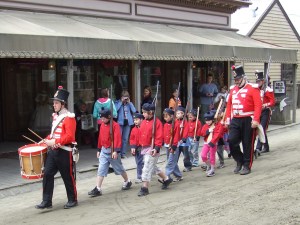 Please share with us in the comments section how you help your students place their current historical studies in context and link past and present areas of study.