As this blog already contains several posts about the history of Christmas, this festive season we have decided to explore the history of beach holidays!

Bathing in the ocean became popular in Europe in the 1700s, before Australia was colonised by Britain. Both immersing yourself in the water and drinking sea water were considered to cure all kinds of illnesses. As a result, many of Europe’s rich and powerful would spend a “season” at the seaside, bathing most days using a bathing machine. Believe it or not, winter was considered the best time to do this.

A bathing machine was a hut on wheels in which people changed into their swim suits. This carriage-type contraption was then pushed into the water (using man power, horse power or sometimes even steam power) so the bather could step out and immediately lower themselves into the water. Some bathing machines had tents that would extend out and enable bathers to enter the water in complete privacy, while some came with “dippers” or “bathers”. These were attendants of the same sex as the bather who would dunk you underwater the correct number of times to cure whatever illness you had been diagnosed with.

Queen Victoria’s husband Prince Albert believed that sea bathing was beneficial to one’s health, and in 1846 he had a bathing machine installed on the beach near their summer palace on the Isle of Wight. Victoria and her daughters regularly used the bathing box to enjoy the water. The queen’s bathing box, used to preserve her modesty, is now fully restored and on public view. 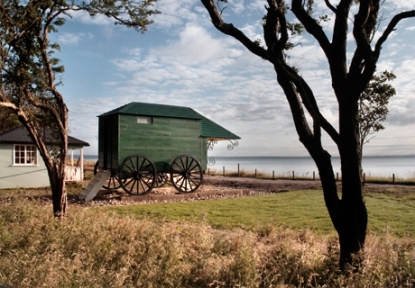 Queen Victoria’s bathing machine has a veranda at the front where curtains concealed her from view whilst she bathed. Inside is a changing room and a plumbed-in toilet. The whole contraption was run into the sea from the beach along a long ramp, and pulled back using a wire rope and winch!

By the 1850s, when gold was discovered here in Ballarat, dippers had gone out of fashion. However, people continued to visit the seaside especially after train travel made reaching the beach cheap and convenient.  Some historians think that the main motivation now was pleasure and holiday making although many people still believed a visit to the seaside was good for your health. By this time people were going to the beach during summer rather than winter.

Bathing soon became popular here in Australia although in some parts of the country it was banned during daylight hours up until 1902 because a wet woman in a swim suit was considered an indecent sight. Furthermore, some men were said to enjoy swimming naked, so you definitely couldn’t do that in public.

The St Kilda Sea Baths were opened in 1860 to take advantage of the popular seaside excursion trend. These enclosed sea baths were thought to keep bathers safe from Australia’s scariest sea creatures. However, even before the baths were built, St Kilda was a popular swimming spot. In the 1840s it already had bathing boxes (bathing machines with their wheels taken off), and by 1854 Captain Kenney had deliberately sunk a ship just off the beach and put out ropes to it for people to swim along. Once the St Kilda train station was opened in 1857 more sea baths opened and regular swimming competitions were held. As businesses, the baths were not the financial success the owners hoped as the majority of visitors to St Kilda soon became confident to swim in open water.

Since these humble beginnings, going to the beach has now become a normal part of Australian life. Most Australians live on or near the coast, and some of our beaches like Bells in Torquay, Bondi in Sydney and the Gold Coast near Brisbane are considered to be among the best in the world. Interestingly, having tanned skin was avoided by European women during the nineteenth century, as it showed you were poor and had to work outdoors like a peasant.

Like swimming, the history of swimwear is also fascinating, read all about it here. Enjoy the summer sun and happy holidays!

The history of sea bathing: http://en.wikipedia.org/wiki/Sea_bathing